Sybil is busy calling up people and bothering them right now, so this is Jen here filling in.

I created Sybil in response to the constant harassment from the moronic debt collectors who could not care less about my situation, and started writing to help cope with my extreme physical and emotional pain.

This 62 year old fartknocker sports a head full of salt and pepper hair, usually covered up by a ball cap. His eyes glow red and he eats brains for dinner.

Gregory is Chronic; paranoid people will steal his stash, Greg flashes his dime-bag full of perfectly cultivated buds on the bus when he is spaced out on coke he snorted while coming down off a weed high. Yes, he is that dumb.

This Miami Dolphenergans fan gate-keeps in Fakebook groups. Greg brags about his biggest life achievement, having seen someone in 1991 going down the road who owned one. The one-and-only 1988 Chrysler Conquest – just like the one Gothic Diana Ross drives – Greg witnessed the most important event in his life and tells everybody about it.

Undead Greg stopped driving due to DUIs; he lost his license. Now he can only watch people going down the road who own one. He is butthurt because he no longer can legally hunt down the living driving his Ford imbecile machine, covered in obnoxious decals, bearing wheels way too large for the body.

Ableist as it gets, Greg audibly harasses disabled folks on the bus, stalking them in cafés. He thinks they should work and accuses every disabled young person of “faking it” and tag teams with his BFF Pris Dixon to bully strangers since he is a scared wuss with no life.

He desperately needs a hobby (besides devouring the living). Manteno residents hope he gets one soon.

Back when I had just graduated high school and was looking forward to attending college, I applied for — and got — a job at a local drive-in movie theater. Despite the pressure put on young folks to get a job, employment was not easy to come by in a small city about to lose a couple tens of thousands of its people due to Base Realignment and Closure (BRAC).

Despite the odds, I managed to get a part-time job working at one of the few remaining drive-in movie theaters in my state. The first day went well. My supervisor was impressed with my work ethic and ability to work with customers. He warned me about the theater owner; saying he will either love me or hate me.

The next day I met the person who would later become the main inspiration behind my character Konrad “Kon” Teirant, the CRASS Accounting Chief, Cinema-13 owner and Vaudeville troop Moronic Half Assets emcee. The theater owner put the skinny blonde girl up front to collect tickets, while placing heavyset and awkward goth chick me to work behind the scenes. He could not wait to complain.

“Fill that popcorn bag. No fill it up more. Does that look full to you? It does not take a genius to figure it out. Look, I don’t think it is going to work out.” Puzzled and stunned, I asked him what he meant. He told me to leave and not come back. I never got paid for the work I had done for him.

I remember calling up my cousin, crying because I had lost my job that summer I graduated. She called the theater owner “a tyrant”. I did not know that he was a grandiose narcissist, because narcissism was never talked about in our area. I wish they would teach about it in schools, the signs of these personality traits and how to avoid them. I also wish the boards in charge of school curricula would create reforms which mandate schools teach empathy skills.

I found out later that he owns a chain of theaters in the region. I saw him in a restaurant a few years later, bragging out loud about having been flown to Atlanta, and getting loaned an Armani suit to wear for whatever business deal he was trying to get, or “big bag” as he called it.

A few years later, I was sick as a dog on Christmas Day, and called into work at my then call-center job. I wrote a song about a character I called “King Tyrant.” I made a crude sketch of him holding a “big bag”. I played the song live a few times but it was not well received, and it was not very fun to play anyway.

In 2017, after having left an emotionally abusive relationship with a communal narcissist, I started writing and creating characters. I wrote a lot. I drew a lot. To cope with having been emotionally abused and being all on my own on the verge of suicide, I wrote short stories and launched MoronicArts. I drew my very first sketch of the now-renamed Konrad Teirant while receiving treatment for suicidal ideation in a psychiatric unit.

I can certainly say writing, drawing, and having zero contact with my emotionally abusive former husband have helped me heal a lot. I write to help people laugh and make myself giggle at the same time. Laughter is one of the best medicines, for me anyway and I hope to continue to pay it forward, as I would never wish what I went through on my worst enemy.

Big thanks to the very talented and underrated artist AleaNer for drawing Kankakee County denizens Bern Cacca and Sybil Kibble!

Please visit the gallery of this incredibly talented artist and leave them a follow, and a comment! Commission slots open, too!

Town troll Leona Krabalsky runs from under her bridge between Kankakee and Bourbonnais after Manteno sociopath and port-a-potty entremanure Peppi Cacca confronts her for selling fake drugs. Peppi brags he has “ARI: Armed Redneck Insurance.”

Let us wish Kankakee’s biggest dog-food fan a happy birthday! We hope your day is a real treat!

Happy Birthday Damien Hurlbutt! We hope you made it out that dumpster okay!

Sybil sent me here. This is Jen. You might know me, the creator of the Moroniverse? Some people have been asking me why I draw these fools the way I do.

I am starting a new series of blog entries explaining the madness behind my methods.

One reader asked me why some morons are drawn using ragged lines, while other characters are drawn with smooth lines and curves, some even in the same panel. 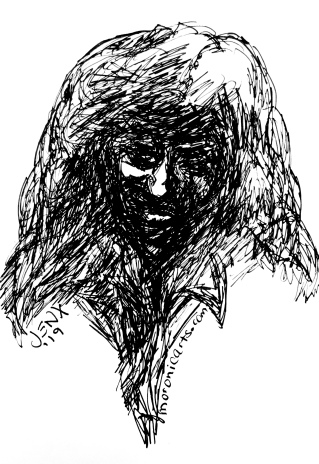 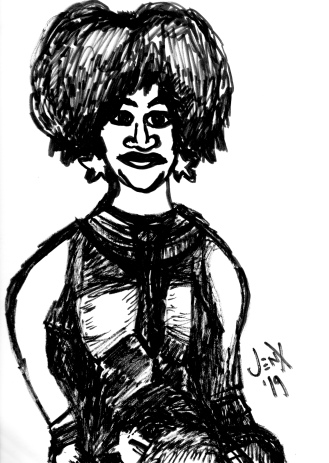 Pat Splatt, on the left, you see, is a huge sociopath and collapsed narcissist.

Kitty Bortolotti, on the right, is a huge sweetheart, full of compassion and empathy.

Scenes like the one below, make generous use of noir lighting to represent the dark characters: 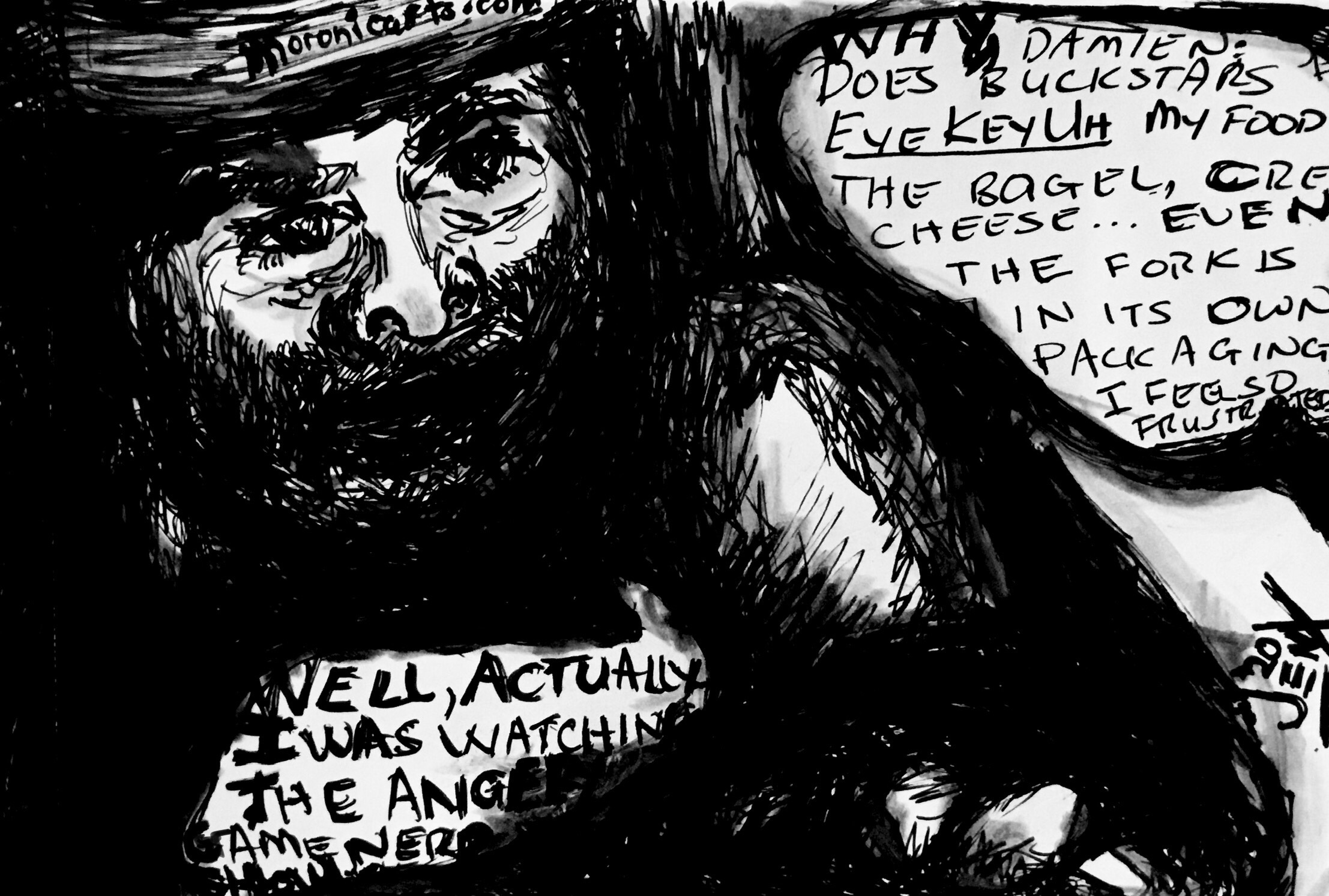 I dunno, would YOU hang around Damien?

Thank you to my readers for submitting their questions, and for continuing to read.

Next time I plan to tell some of my ideas behind the characters.

Be sure to like the We Are CRASS page on Facebook and tell your friends about the good clean fun o’er here at MoronicArts. 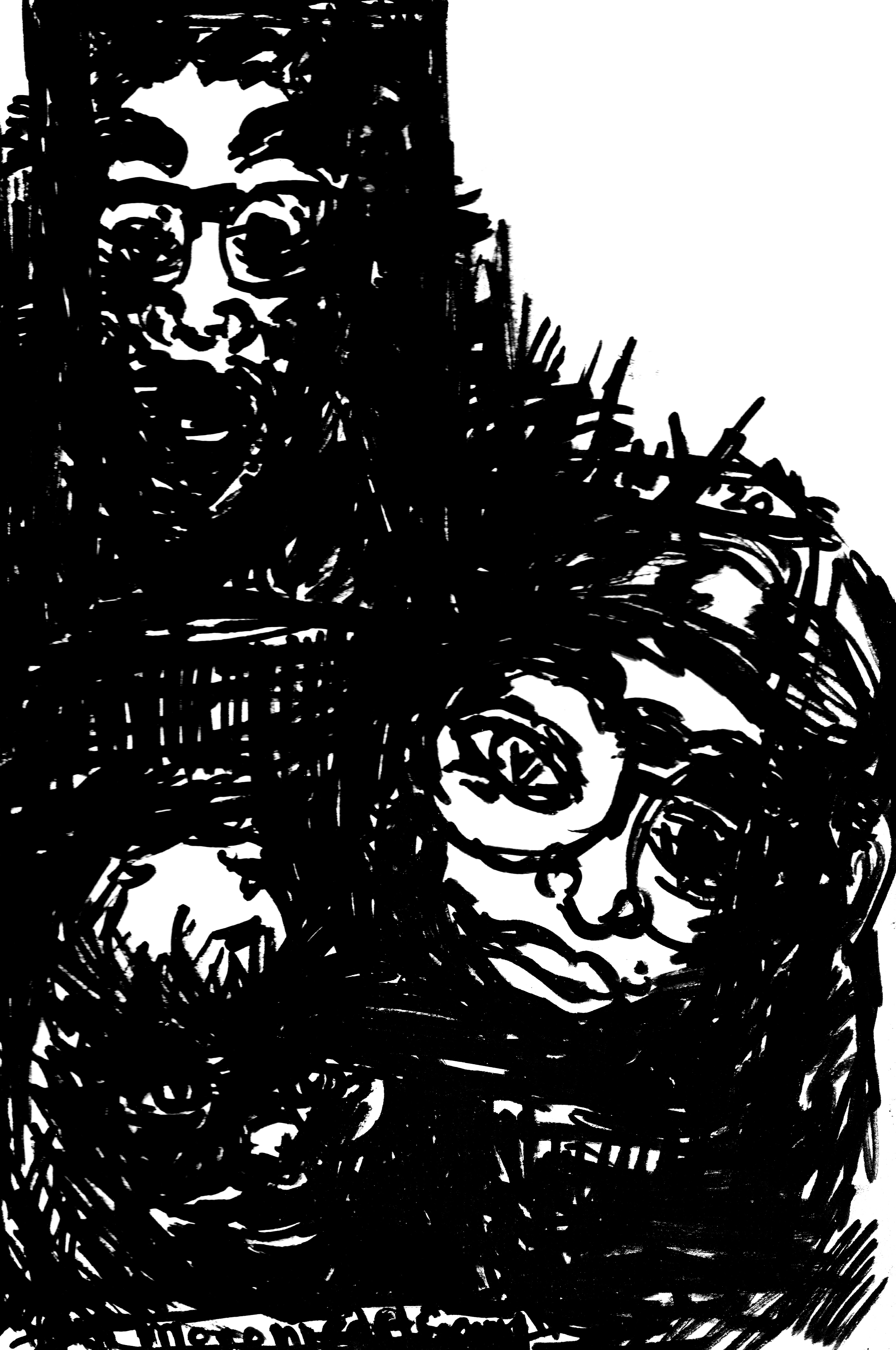 Two-timing Rachel Shelley came over from Detroit to meet her OKStupid lover, Damien Hurlbutt, only to cheat on him with Kankakee heroin addict and useless hoser Leon Peeonne.

Neckbeard Damien continues to leave her messages from his flip phone.  He thinks he is going to win because he is such a “nice guy”.

Robbie Hulrbutt is feeling down because he cannot seem to get a date. Do you think he will ever figure out why? 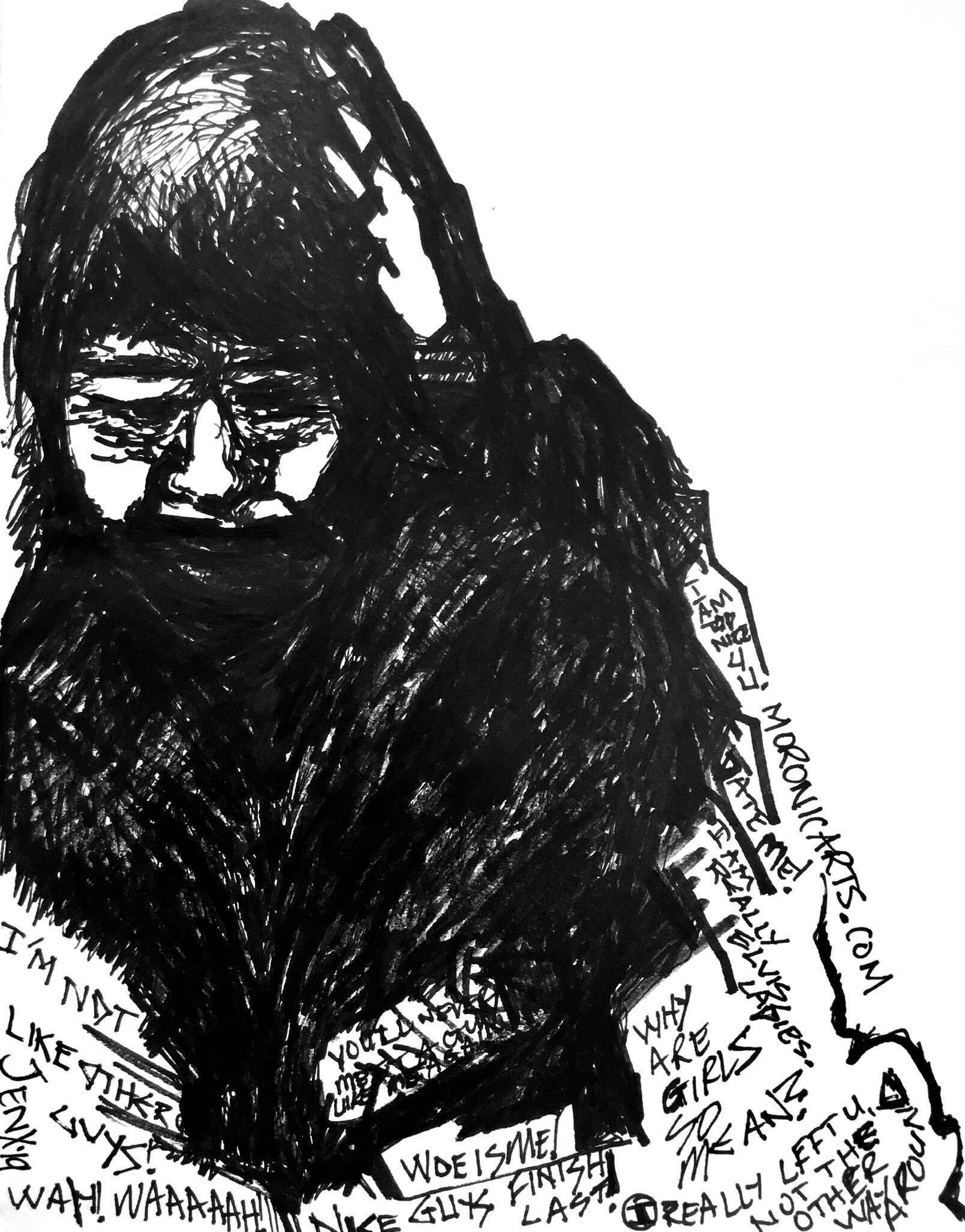 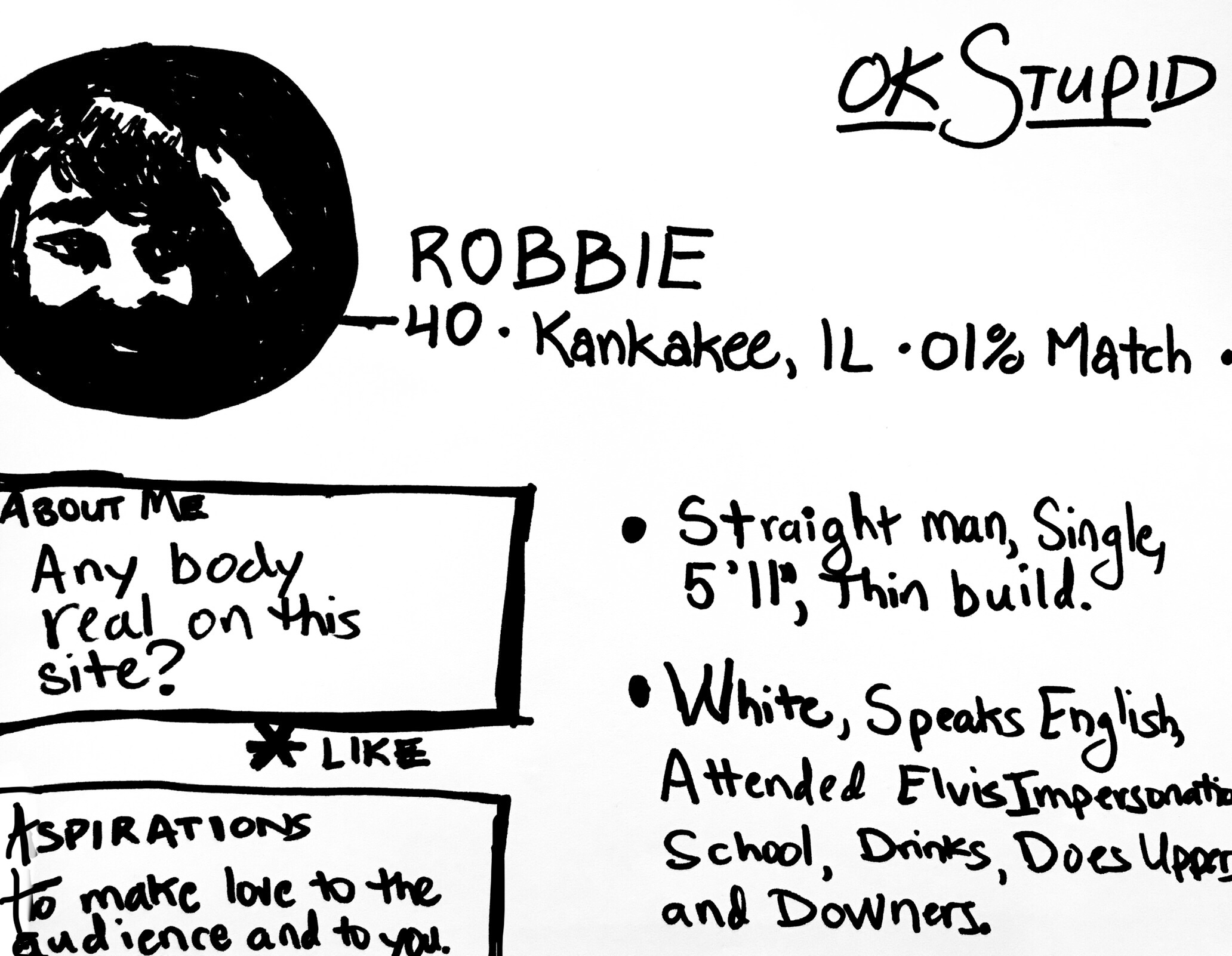 I mean, look at his dating profile! Isn’t he a keeper? Would you date him?